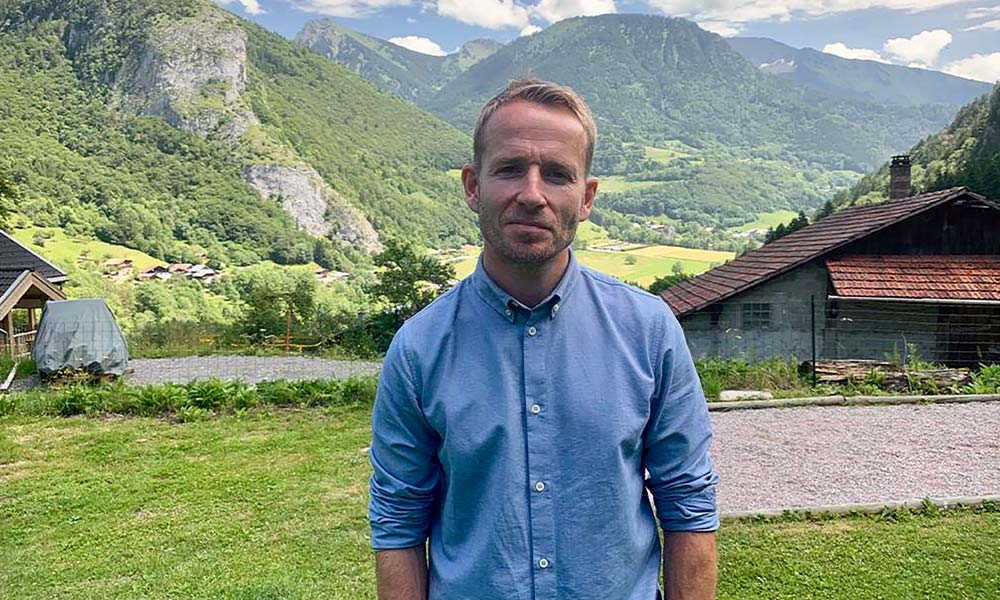 Jonnie Irwin – Morzine Is My Place

It’s June 2019, I’m on my weekly magazine delivery round, heading into Morzine fully loaded and ready to restock. By my side is Molly Jefferies, it’s the final afternoon of her week-long work experience in our office. “Oh look, he’s already got a magazine,” says Mollie, as we drive past a bloke walking along the road, Source Summer 19 tucked carefully under his arm. “Hang on…” I say. “Was that Jonnie Irwin off of the telly?” I screech to a halt in the middle of the road before attempting a U-turn, but Molly has no idea. She’s never watched A Place in the Sun – Home or Away and she’s looking at me like I’m crazy. Jumping out of the car and shouting ‘Excuse me, are you Jonnie Irwin off of the telly?” does little to dissuade her. 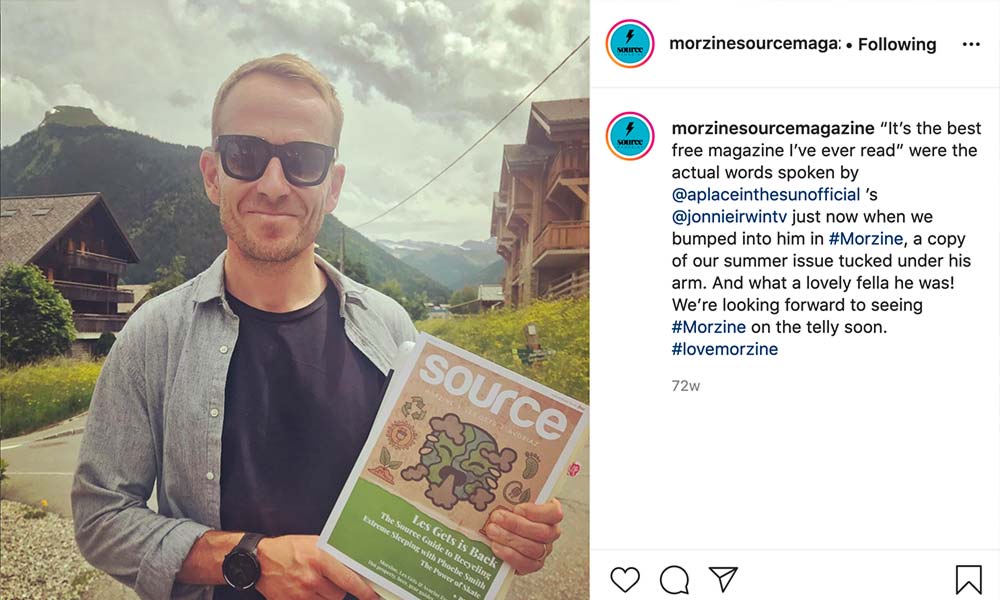 As it turns out, it was Jonnie Irwin off of the telly, and we have a lovely chat about why he’s in Morzine (he’s filming), how lovely the village is (it is, everyone should live here) and about Morzine Source Magazine (yes, it’s mine, I’m the delivery girl too.) I take the obligatory picture and in a fit of teenage giggles, Molly and I bundle back into the car. “What a nice bloke!” we agree.

A Place in the Sun – Home or Away on Channel 4 is one of those programs that everybody loves. For 21 years the show has offered one hour of pure escapism, taking us to beautiful destinations across the globe with Brits hunting houses. Will they find their dream Florida villa? Or that perfect Spanish holiday apartment by the sea? Will they be inspired to pack up and leave the UK for good? Or will they abandon their plans and stay in sunny Wiltshire?

“Amie, you sound like you’re in the pub!” says Jonnie when I call for a chat. I’m not, unfortunately. France has just entered Confinement 2.0 and any prospect of the pub is many weeks away. Jonnie is at home in Newcastle where he lives with his wife Jessica and three boys. I’m keen to know how he came to appear on our TV screens in the first place.

“It was 2003 and I was already working in property actually, focusing on the sale of business properties, hotels, that kind of thing,” Jonnie explains. “My mate Bobby was asked by a TV production company to recommend a property expert to join their team. I’d plateaued in my current role and was actually considering a move to Sydney.” Jonnie had toyed with the idea of becoming an actor at an earlier age, but “I’m a provider” he tells me. “The idea of acting felt too uncertain.” Upon return from a holiday in Argentina, Jonnie was called to audition for A Place in the Sun – Home or Away and he’s been a regular on our screens ever since.

“Abso-bloody-lutely!” is Jonnie’s response when I ask him if he prefers the ‘away’ to the ‘home’ roles on the show. Five weeks in Florida was his first mission abroad for the show, but a lot has changed in the last 16 years. “When I was single, I’d be working on Escape to the Country and Cowboy Trap for the BBC, A Place in the Sun and The Renovation Game, going from set to set. I’d be away for months at a time, usually between 25 and 30 weeks each year,” he explains. “But now I have all these children, I want to go away less.”

In June 2020 Jonnie and his wife Jessica welcomed identical twins to join older brother Rex and filling their world with in three boys under the age of 18 months. “I feel guilty leaving my wife on a Sunday morning to go off to work for a few days. We used to take Rex with us, his first six months were jet set; Cyprus, Spain, Greece…” If leaving his family at home is the least enjoyable part of his job, I wonder what the best part is? “It’s the challenge. I want to see emotion – good or bad – when I show a couple a property on the show,” Jonnie explains. “I also enjoy the sense of anticipation when I’m travelling somewhere new.” New, like Morzine? “No! I go to Morzine out of my own volition! Morzine is my place!” As it turns out, Jonnie has been here several times, summer and winter, and is desperate to join us all for more mountain biking in the summer. “Some resorts are just resorts,” Jonnie tells me. “But Morzine has its charm and a community that you just don’t experience in other resorts.” Is he surprised that so many Brits live here? “Not at all, it’s so accessible. A lot of places in France have become hugely popular with the Brits.” A conversation on the merits of Dordogne-shire follows… 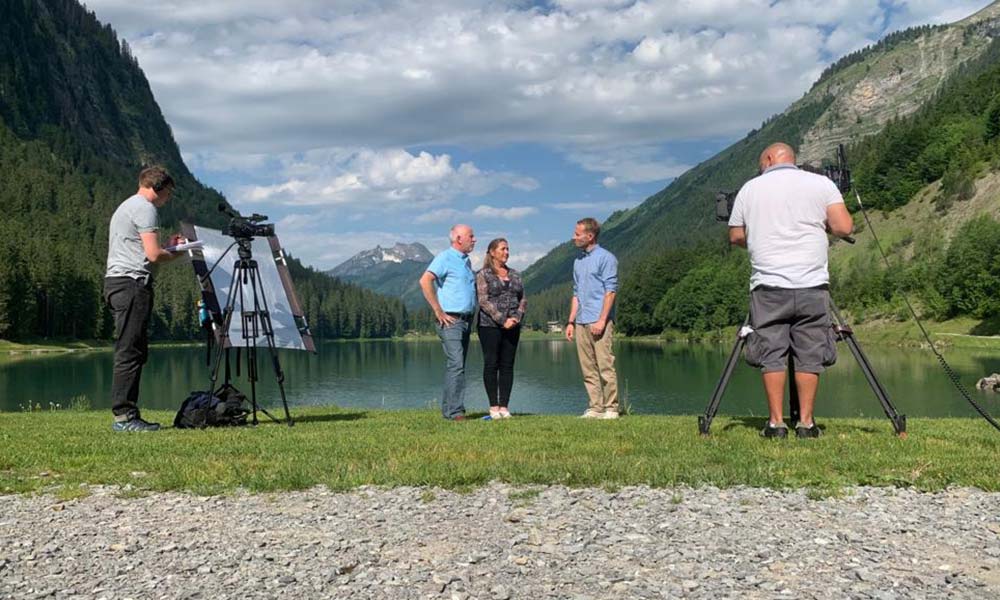 Now, I’m not sure about you, but I’ve certainly revisited my own definition of ‘home’ since COVID-19 started causing chaos. I wondered whether this is a trend Jonnie has seen within his own consultancy business (he also finds properties for private clients, outside of his TV work). “This is a big movement.” Great! It’s not just me then! “Buyers who’d previously considered a holiday property abroad whilst retaining their permanent home in the UK have flipped. They’re now considering a full move abroad whilst retaining a pied à terre in the UK.” I guess that comes with a different set of requirements though? “Lockdown has shown many people that they can work from anywhere. Buyers are now looking for more substantial properties, where they’ll spend extended periods of time.”

“A mountain village that offers the full Alpine life, that’s the dream”

I almost dissuade myself from mentioning the dreaded B word in the face of Jonnie’s enthusiasm for the international property market. But he’s probably expecting it. “I’m European to the core,” he tells me. “I tried to scare people off voting leave during the referendum.” Will Brexit change demand for European property? “There’ll certainly be more transactional hoops to jump through than before,” Jonnie believes. “But Brits have been buying in The States for years, and that involves a lot of red tape too. It doesn’t put people off!” That’s a very good point, but what about the relentless uncertainty? “There’s sure to be some bilateral agreement ultimately,” Jonnie believes. “Airports will take longer, it’ll become more difficult to travel with pets,” he continues. “But come next spring and summer, this won’t be putting buyers off. Brexit won’t stop buyers coming to France.”

On that note, I’d read that Jonnie’s hobbies include snowboarding, mountain biking and hiking and I happen to know a little place that does all three brilliantly. Has he considered buying his own place in the mountains one day? “Always. I ran out of time when I last came to Morzine, there’s so much more I need to explore. A mountain village that offers the full Alpine life, that’s the dream eventually.”

Jonnie Irwin – Morzine Is My Place