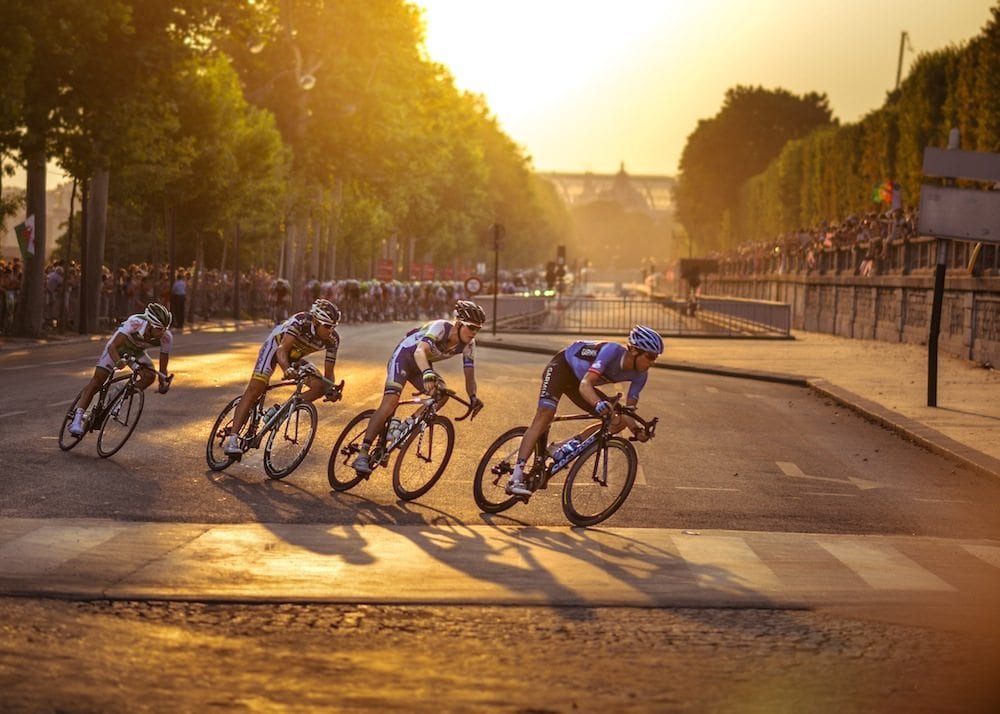 Any road cycling lover that’s ever watched Le Tour on TV can’t have failed to notice the sheer passion on the faces of roadside spectators. Le Tour may well have a global TV audience of 3.5 billion, but it’s the fans camping for days along the route that truly deserve our respect. But if you think you’ve seen the passion of Le Tour on TV, just wait until it rolls into Morzine this summer.

It was awfully kind of my newly adopted hometown to deck itself in bright yellow I thought, waking up on my 30th birthday in 2010. There were traffic deviations, enormous TV screens and police everywhere. I was in for one heck of a celebration! Back then I didn’t really get the Tour de France, the world’s biggest annual sporting event. Those lycra-clad peddlers just weren’t my thing. Whilst I’ll remember July 2010 for my milestone birthday, die-hard Tour de France lovers will remember the Morzine-Avoriaz stage finish for many other reasons.

Bradley Wiggins hit a wall (not literally) on the final approach, just before the climb started to ease, crossing the line in 14th place in the general classification.

Alberto Contador, eventual winner of the 2010 Tour, was later stripped of his title and banned from professional cycling for 2 years following a doping scandal that’s said to have originated in Morzine.

The 2016 stage finish in Morzine-Avoriaz has a lot to live up to and it’s impossible not to be swept up in the excitement. When Stage 20, the penultimate day of Le Tour and the ‘Grand Final’ for the climbers, rolls into town on Saturday 23rd July, all eyes will be on Morzine. The very next day, the winner will be crowned on the Champs Elysee in Paris.

Here’s the details you need to make the most of your Tour experience:

Leaving Megeve (1050m) at around 1pm, the 146km race passes through Le Grand-Bornand, Scionzier and Mieussy before ascending the Col de la Ramaz (1619m) into Taninges then Samoens, followed by the epic final climb of Le Tour – the Col de Joux Plane (1691m).

The Col de Joux Plane will be closed to vehicles for 12 hours before and after Le Tour passes over this steepest of mountain passes. There are several great spectator points on both the climb and the descent, which you can either drive up to the day before, or walk up to on the day.

Expect the resort roads featuring on the route to be packed with spectators hours before the riders even leave Megeve. There’ll be some very necessary traffic restrictions, deviations and road closures across Morzine from Friday 22nd until Sunday 24th July. We’d recommend travelling into town on two wheels rather than four.

Le Tour is expected to descend the Col de Joux Plane into Morzine from 5pm, give or take half an hour. Riders will make the sharp left-hand turn past the Sporting Hotel, down towards the Pompiers / fire station, then take another sharp left towards Place d’Eglise, the Mairie and left again up the Rue du Bourg, finishing in front of Morzine’s Office de Tourisme, in the very centre of the resort. Cue podiums, medals, a massive crowd and an incredible, unforgettable atmosphere.

If you’re visiting Morzine before or after Le Tour, and you’re wondering what all the red spots are, let us explain. Le Tour 2016 is made up of 21 stages and a red polka dot jersey is awarded to and worn by the best climber at the end of each mountain stage, making him the ‘King of the Mountains’. Stage 20 of Le Tour in 2016 is the final mountain stage and to celebrate, Morzine is bedecked in red polka dots.