“It’s just me, my snowboard and the mountain”

Inside the perfectly balanced world of Katie Ormerod.

Usually, when I begin to piece together an interview with an athlete for this magazine, I start by explaining to you, our readers, why said person is important. Why they are relevant; why you need to know about them. We’ll look back at their first time on skis or a snowboard, we’ll look forward to consider their potential. But for Katie Ormerod, it’s all about the here and now.

“Lockdown was surprisingly OK,” Katie tells me when I ask for her take on the strangest times we’ve ever known. She’s at home in Brighouse, West Yorkshire when we speak. “I went into it with a positive mindset, my sponsors at Red Bull sent me a load of gym equipment and I converted my garage at home. It kept me busy, I ran each day and learned to skateboard. It gave my days a purpose,” explains Katie. 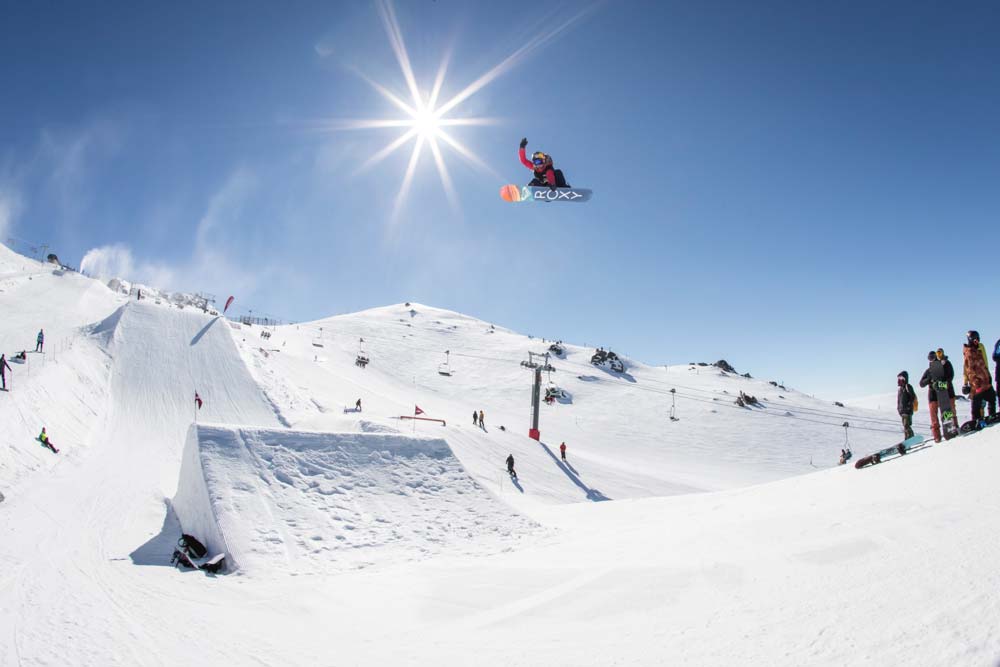 At just 23 years of age, Katie is most famous for her firsts. Aged 16, she was the first female snowboarder to land a cork 1080 (three rotations and two inverted flips). She was the youngest female snowboarder to land a double back flip. She’s the first British rider ever to win a snowboard World Cup and the first British female to win any kind of World Cup on snow. That’s why she’s relevant, readers. You need to know about Katie Ormerod.

“This year, my season was supposed to start in August in New Zealand. Obviously that didn’t happen.” With the 2022 Beijing Winter Olympics on the horizon, the next 12 months of Katie’s life have been carefully mapped out. So what’s next? “Potentially a comp in North America, or I’ll wait for Europe to reopen. I love competing and I’m eager to get going again.”

“I watched the rest of the games from my hospital bed. Watching my friends compete was an emotional experience”

Katie became the first British snowboarder to win a World Cup title in March 2020 after the International Ski Federation (FIS) cancelled the final event of the season over COVID-19 concerns. She’d been on the podium in all four of the season’s slopestyle events, making her the overall strongest rider of the season and the owner of a coveted Crystal Globe. But where is the globe? “It’s still in the box! Honestly!” Katie explains. “I do have a trophy cabinet, but I’m way too nervous to display it. It’s very precious. Maybe it needs its own cabinet?” 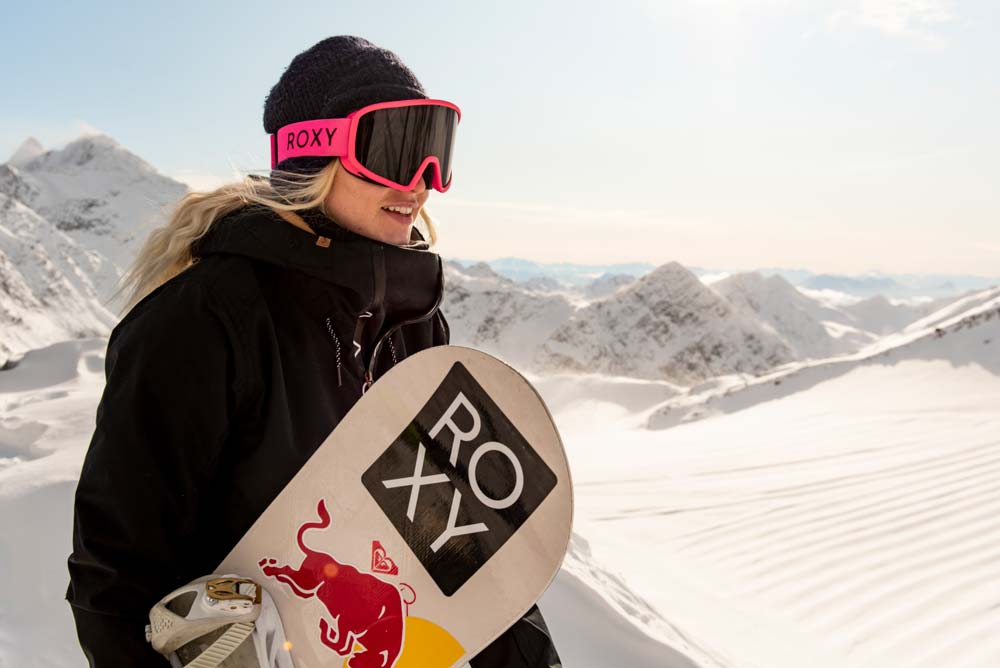 If you’re new to Katie’s story, you might imagine a career heavily pinned to success, hard work and determination. But it wasn’t always this easy for Katie. Just before the 2018 PyeongChang Olympics, Ski Sunday presenter Graham Bell described Katie as “arguably Britain’s best medal chance for PyeongChang 2018.” She’d even placed third at the Big Air World Cup test event on the very same course in November 2016. To say hopes were high would be an understatement. Two days before the games started, she broke her wrist, but for an athlete used to the bumps and scrapes of professional competition, she went on to compete regardless. Then, during a training run, she broke her heel in two places. “It was an awful injury,” Katie tells me. “And not how I imagined my first Olympics would go,” she continues. Rushed to hospital in Seoul, it took doctors over an hour to remove her snowboard boot and several operations followed. “I watched the rest of the games from my hospital bed. Watching my friends compete was an emotional experience, especially seeing the horrific weather and dangerous conditions for the Slopestyle event,” Katie explains. “I was gutted not to compete at the big air event but I did my best to support my Team GB mates from afar!”

“It was a hard time,” Katie says of her rehabilitation. In total, she was off snow for 12 months and away from competitions for 18 months. “The injury gave me a chance to work on my fitness and my mental strength to come back even harder. I spent 18 months visualising my runs and I began to appreciate snowboarding much more.” But there must be some unfinished business right? We’re only one year away from the next Olympics, after all. “I’m eager to do my runs in Beijing and have fun at the same time,” says Katie.

Perhaps more impressive than Katie’s balanced outlook is the fact that her talent was inspired by and honed on a dry slope at the tender age of five. She didn’t grow up on snow. “Halifax’s ski and snowboard centre is definitely different to real snow!” says a humble Katie. “It’s a carpet made of plastic bristles but I didn’t know any different!” Katie credits the consistency of the setup at Halifax – repeating the same jumps over and over again, alongside the fun, encouraging atmosphere, for her rapid skill development.

“It was a hard time, the injury gave me a chance to work on my fitness and my mental strength to come back even harder.”

“Halifax was the perfect base! It’s just a 10-minute drive from my house; it’s open after school, it’s open all year round.” At the same time as she was taking her first tentative runs on a snowboard, Katie was already an accomplished gymnast, and it’s now that those aerials and inversions start to make sense. “I started gymnastics when I was four years old and I trained and competed until I was 16,” Katie explains. “Gymnastics gives you excellent spacial awareness; the ability to know where you are in the air. This is essential for snowboarding,” Katie explains. “Gymnastics also gives you muscular strength and power and this contributes massively,” she continues. “A double back flip in gymnastics directly translates to a double back flip on a snowboard.” The landing is a little different though, hey?

We can all imagine the physical risks and mental pressures that come with a career as a professional snowboarder. I’m keen to know how Katie manages the stresses and strains – she seems so balanced! “I just remind myself why I’m here. ‘I love snowboarding,’ I tell myself. And I’m able to focus entirely on me. Me, my snowboard and the mountain.” I have to remind myself that this steady, stable, mature outlook is that of a 23 year old. 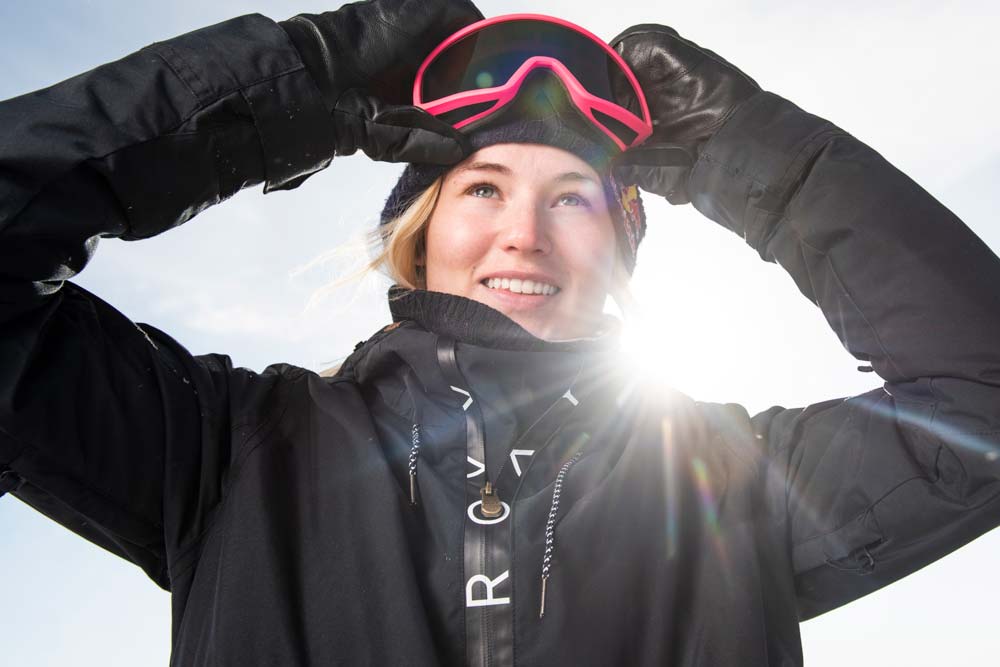 It wasn’t until 2011, when Katie was just 14, that slopestyle snowboarding became an Olympic event. “I looked up to the other riders, like Jenny Jones, they were such great role models for the sport,” Katie explains. “They showed me how much fun snowboarding could be and now I want to be a good role model too.” During lockdown Katie hosed a morning online stretch session on Instagram, encouraging her followers to enjoy an active lifestyle and have fun along the way. Again, to find a balance.

But who will Katie be a role model to? I’m keen to know who she’s watching come through the Team GB park and pipe snowboard squad. “Mia. Mia Brookes,” she says in a heartbeat. Now, 13-year-old Mia needs no introduction on the pages of this magazine, but in case you missed our extensive Mia-fest feature last winter, you’ll find it here.

From dry slope beginnings to sustaining a potentially career-ending injury at the highest level, Katie remains calm yet motivated, fun yet mature beyond her years. She’s perfectly balanced. Throw in a global pandemic, she won’t be shaken.

“I just remind myself why I’m here. ‘I love snowboarding”

“It’s just me, my snowboard and the mountain”